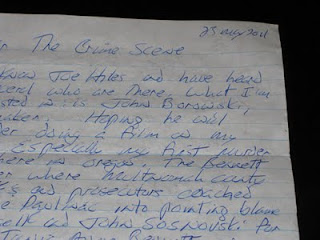 Holmes coming soon to itunes.
Posted by John Borowski, filmmaker at 8:59 AM

In an effort to complete my vision for my film, Carl Panzram: The Spirit of Hatred and Vengeance, by the end of 2011, I have begun an online fundraising campaign in collaboration with Indie Go Go. I would appreciate any help and support. If you cannot contribute a minimal amount, then maybe you can help spread the word via email, facebook, myspace, or posting the widget or banner on your website(s). I am also available for TV, radio, and print interviews to help spread the word.

Here is the Site: http://www.indiegogo.com/Carl-Panzram-The-Spirit-of-Hatred-and-Vengeance

Take a moment to check it out on IndieGoGo and also share it with your friends. All the tools are there. Get perks, make a contribution, or simply follow updates. If enough of us get behind it, we can make Carl Panzram: The Spirit of Hatred and Vengeance happen.

Thank you for all of your help and support.
Posted by John Borowski, filmmaker at 10:15 AM